I spent five weeks in Kaunas, Lithuania (I did not visit Vilnius) to wrap up nearly four months in the Baltics. Here are my thoughts..

Lithuanian girls are gorgeous. These girls are way way up there. What I liked most about them was their extraordinary long hair, often to their waist. I felt like I was walking around on a shampoo commercial set. They are the most thin of all Baltic countries, but their bodies can be boyish without any curves (their asses were unsatisfactory). They had very pretty faces and great grooming and makeup habits. It doesn't get a whole lot better than this.

The local guys got game. Lithuanian guys are probably the best looking and tallest (real tall!) of the Baltics. Surprise surprise that the girls really like their men. The guys also approach like machines though they tend to overdrink and crap out by 3am. Most nights I was in the club competing with tons of aggressive Lithuanian and foreign guys (Turks and Spaniards, mostly). It wasn't easy or particularly enjoyable.

Low eye contact. The girls were stingy with looks, but when they did look, I knew I was in. If she looks at you, let out a smile. If she smiles back, she's definitely interested. The ROI was low when I approached a girl at night who didn't give me eye contact first. The game here was your appearance and energy. If a girl really likes you, she will look AND smile, which was quite refreshing since I don't get that in other countries.

You need a wingman in the clubs. Rolling solo is no good. Many times a girl will be in pairs and even if one girl likes you, she won't ditch her friend.

It's really hard to get a 7 or above  (turima omeny - produkto kokybės skalė dešimtbalėje sistemoje). I was there for five weeks, worked like a dog, and did not fuck a Lithuanian above a 6. Believe me I tried, both day and night, but I ran into three problems with them:

1. Relationship minded. Lithuania was almost identical to Latvia in that the pretty girls are already snatched up. If she's over 21 and pretty, I'd bet money she has a boyfriend. It was almost automatic that a cute girl was taken. The culture here is relationships.

2. English is least common of all other European countries I've been. The language barrier was a mild to moderate problem here. It seems that English is a somewhat recent requirement in school, so if she's over 25 then there's a chance she won't speak a single word of English.

3. Bad attitudes. It pains me to write that the attitude here could be harsh, sometimes even worse than America. For example, one girl called me a "monkey" when I approached her. Lots of girls went out of their way to try to make me feel like shit. There is an abrasiveness that was worse than Estonia and Latvia (though Latvia could be bad, too). There are some sweet, nice girls, but less so than the other countries. There was no shortage of bitchy hot girls. I was surprised about this, but that was the reality.

That said, the saving grace is that 6s and below are not hard. They will be very open and straightforward to bang (even one night stands). I hated how the line of demarcation was at the 6 range, where anything above was off limits. Ironically, the cutest girl I banged in Kaunas (a 7) was Polish, though I did fool around with an 8 (but didn't close). Still, not all 6s are ready to jump a foreign guy's bones. Even some of them can have attitude, so if you go dumpster diving you can be in for a surprise. You'll need longer term strategies to be consistently successful here.

It's possible that my rating standards are skewed and need to be recalibrated with a visit back to America, so my 6 could very likely be your 7. But to me that doesn't matter because in Estonia the 7s and above were accessible to me and with less attitude. Now I know why Estonian guys were trying to keep me out... their women prefer foreigners.

For Lithuanian hotties, you have to use long-term python game, where you orbit around her while she's in her relationship, gradually squeezing as the relationship deteriorates. But this requires a lot of time, six months or more. I was placed in orbits of three very attractive women. If I lived in Lithuania permanently, I'm guessing the orbiting investment would pay off somewhat.

The hot Lithuanian girls will not be about you unless you they have a particular interest in English or your country. Two of the girls I orbited around worked as a lifeguard in the States for a summer. If they were single, it would have been easy for me, but there's no way an 8 in Lithuania is going to be single for long. I'm amazed at how tight the dating market is. Being single is seen as almost pathetic so everyone is in a rush to settle with their less-than-ideal mate. This is why girls with boyfriends entertained me as an option by letting me escalate just a little.

Day game is effective. It was in the middle of winter when I was there so I did most of my approaches in the mall, though opportunities were still limited. The hottest girls I met were definitely from the day. I can imagine doing five times better in warmer climate where the street opens up as an option. The only reason I won't come back anytime soon is because I want a place where BOTH day and night game is fruitful. This is a reason I'm not in love with Colombia, since night game is a poor option there.

To summarize the Baltics, in Riga you'll get scammed but easily fuck a woman over 30. In Estonia you can make solid pulls of all ages if you move your ass. In Lithuania you will be tortured by not being able to fuck high quality, though you can do quite well with average girls. It was extremely frustrating not to fuck the top tier even though so many of them were walking around (with their boyfriends). If it was any consellation, I fucked more girls in Lithuania than the other two countries. Lithuania is kind of like the Argentina of the Baltics... beautiful girls but hard.

I'd like to eventually do a recap of the Baltics, but for now I can mildly recommend Estonia. If I came straight to Lithuania after living in the States, I'd have a grand ball with the 6s and probably declare it pussy paradise, but after a year in Europe my standards have shot up to where this wasn't good enough. If you're coming from an ugly country, Lithuania will be fine. Even though is has hotter girls than Estonia, you're more likely to get hotter in Estonia, which itself is seeing a pussy decline. It doesn't look so great for the Baltics, but good times can still be had.

Spots to check out in Kaunas:

Barbara: Only club that consistently has people on Wednesday and Thursday nights. Wednesday is ladies night but ratio isn't so great. The girls are good quality but 7s and above will be difficult. Service is not so good since the male bartenders are busy hitting on the girls.

DejaVu: Best club for a foreigner to pick up. Great ratio (sometimes more girls than guys) on the weekends. Thursday may be worth a visit. You have to bring high energy club game here since it's loud. You'll also need a wingman. Bring a pack of cigrettes since there is a quiet smokers room that girls spend a lot of time in. This club has a no sports shoes" rule.

Room 201: A couple doors down from DejaVu (both are in the main square). It's a slightly more alternative club that has a fun vibe. You can hang by the bar and talk.

Dzem Pub: Hipster bar with friendly girls. Quality is lower than the clubs but you'll be able to pull 6s and below easily by the main bar.

Republic: American-style bar near Dzem Pub that is a good spot after 2am on weekends. I got the warmest responses from here, including my first bang. Dzem Pub and here were easiest to roll solo.

Acropolis Mall: The biggest mall in the city with grocery store, restaurants, coffee shops, and ice skating rink. I went here every day and had some good pulls. It was my Kaunas hang-out since in the winter there was no where else to go that had a lot of people.

Here are some pictures of girls I'd classify as 6's and 6.5s for Lithuania. If you think these girls are beautiful then you will like the level of talent there.

I would do okay with this type of girl there (a 6). Notice the hair length... Now this is a 7. Notice hair length.. 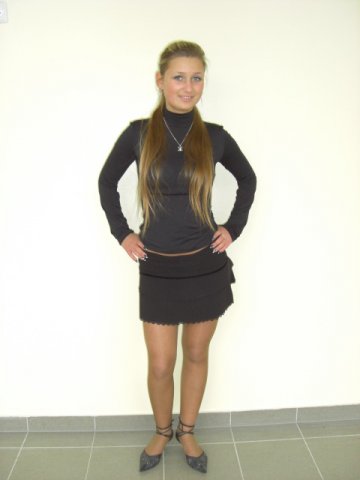 Alright here are some girls I consider 8s from their pictures. This level of quality is not rare. I could only orbit around this level, and in one case I got to 3rd base, but no closes. Girl I was talking to for a while looked like this except had a better face... With these girls you can look (and talk), but not touch! You gotta either have a strategy, stay long term, or get lucky. It's not an issue of "game" as it is logistics and time.